The last blog talked about no longer tracking electrons through the coulomb force, but rather, thinking of an electron as being confined to a specific area around the nucleus at a specific energy level. The electrons are so fast and light compared to the nucleus of an atom that we need a better way to model what is going on. The quantum mechanical model allows us to track the quantum status of electrons, atoms and photons.  We start with the Orbital or principle quantum number (level 1,2,..) and the Azimuthal or location on a sphere (s, p,..). This model provides an effective method to track electron energies, the creation and destruction of photons, the movement of atoms and the creation and destruction of bonds between atoms.

The Helium-Neon laser presents an exciting opportunity to model this type of activity. Both Helium and Neon are very stable gases. Helium has two electrons completely filling the first energy level and Neon has eight electrons completely filling the first two energy levels. A Helium-Neon laser combines these two gases in a long tube and passes a steady stream of electrons through the gas between electrodes (anode and cathode) within the tube. This steady stream of electrons flying through the gas, often bumps electrons in the Helium from level 1, up to level 2. Often Neon electrons are bumped from level 2 all the way up to level 4 or 5 by the electron stream or through interaction with an excited Helium atom. 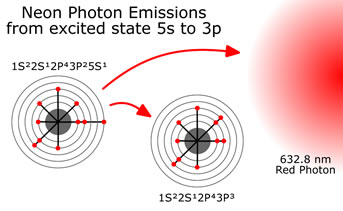 At this point the laser “lights up” like a florescent light bulb, emitting photons as the electrons fall back into their normal position. Some of the photons hit other excited Neon electrons causing additional photons with the same energy, direction and phase to be created through a process called “stimulated emission”. Mirrors on both ends of the laser cause the photons to bounce back and forth within the bulb. The photons caught within the mirrors cause this stimulated emission to occur over and over again, amplifying the number of photons available to shoot at something. Photons of a wide variety of energy are created, depending on what energy levels they are coming from and what energy level or type they are falling to. 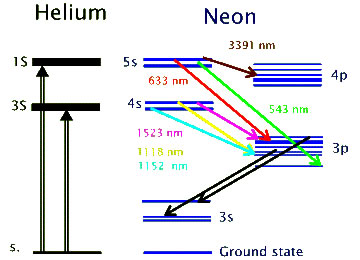 The one we choose to amplify and to consider here is the drop from 5s to 3p. A drop of 1.96 eVolts, or expressed as a wavelength, photons with a wavelength of 632.8 nanometer with an energy of 1.96 eVolts will be produced. A red light laser. To amplify only this wavelength, the width of the cavity is controlled to be an integral multiple of 632.8 nanometers rather then some other wavelength. The width of the cavity chosen, can be in the range of one million wavelengths long, or about 0.3 meters.

Notice the Helium energy levels are expressed as 1S and 3S. There is also a number of lines on each of the Neon energy levels like 3p, 4s, 4p etc. To understand this as well as the concept of “stimulated emission”, we must consider the last two quantum numbers.  The first two quantum numbers, Orbital (energy level) and Azimuthal (location on sphere) locate the electron around the Nucleon. The last two  quantum numbers Magnetic and Spin specify the energy of the electrons on the same energy level and on the same location orbital. Ie. the Magnetic quantum number accounts for the multiple blue lines on each Neon atoms Azimuthal location and the 1S verus the 3S levels (singlet or triplet) for the Helium atom.

The electron itself acts as a strong electrical current loop, trapping an orthogonal magnetic field. The current loop spinning in a particular direction causes the North/South orientation of the poles of the electron. Although the electrons are repelled from one another by the charge and the coulomb force, electron magnetic fields can couple. Electrons coupled in this manner are said to be bonded and are referred to as Cooper pairs or a Dirac sea. For the two electrons in the Helium atom, in the ground state (1S²),the Pauli exclusion principle applies and the electrons must be opposite so only the singlet coupling is allowed. In the excited state (1S¹2S¹ or 1S¹2P¹), the electrons no longer are on the same level, so they do not have to be opposite. Hence, the excited states of Helium’s two electrons are labeled 1S for the singlet coupling and 3S for the triplet coupling and have different energies. The same thing, only with more electrons, happens to the neon atom. The sub-divisions for s and p energy levels for the Neon atom are due to electron coupling where allowed.

The emission of a photon is a result of the reorganization of the magnetic coupling. This can happen at a random time when an electron wanders into the right place at the right time with the right energy, it will couple and release a photon to account for the energy difference. This can also happen because of a photon with the right energy, being in the right place with the correct phase, will cause an excited magnetic field to reorganize and release a photon of the same energy and phase as the original photon. This is called a “stimulated emission” and results in an amplification in the number of photons and the laser as we know it today.