A vortex filament cannot end in a fluid; it must extend to the boundaries of the fluid or form a closed path.

In addition to his theorems in fluid dynamics, Helmholtz’s fundamental theorem of vector calculus states that any sufficiently smooth, rapidly decaying vector field in three dimensions can be resolved into the sum of an irrotational (curl-free, longitudinal component) vector field and a solenoidal (divergence-free, transverse component) vector field; this is known as the Helmholtz decomposition.

Group Theory and the Classification of Particles 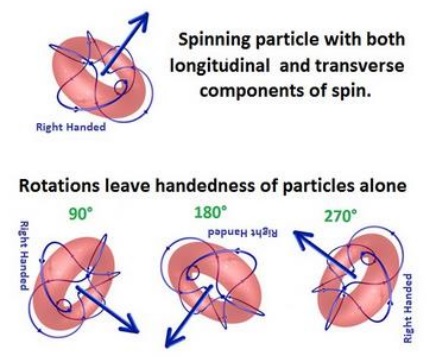 SO(3) – The SO(3) is the group of all rotations about an axis while relections are reversed in a mirror. For the SO(3) group, the fact that the reflection of something in an SO(3) group is not in that same group ensures that when you look at a particle from an SO(3) group, you can tell which division it belongs to. That is the basis for the anti-particle being distinct from the regular particle. 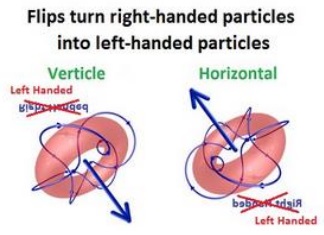 Spinning particles with two components of spin form an SO(3) group. SO(3) group members are classified as either right-handed or left-handed using the right hand rule. You can see from the pictures, that when you bring together one of these SO(3) particles with a mirror image of itself, the spins will conflict with each other no matter what the angle. They will destroy each other.

The Higgs and Weak Gauge Bosons

On 4 July 2012, important experimental results were announced at CERN (Conseil Européen pour la Recherche Nucléaire). The discovery was the Higgs Boson with mass of approximately 125 GeV. This amazing event highlights the direct relationship between mathematics and physics, including the predictive power that mathematics gives to physics. The Higgs was predicted solely through the mathematical modelling of the standard model.

To match the mathematical properties of the Higgs, the Higgs Boson is modelled as the most basic vortex of swirling energy. The Higgs has only transverse components of spin and is unstable with a lifetime around 1.6×10‾²² seconds.

The Higgs Boson is its own anti-particle, with only a transverse component of spin. The mathematics behind a Higgs Boson decay, tells us that a 125 GeV Higgs, has a 23.3% chance of decaying into a W+/W- particle combination and a 2.9% chance of decaying into a pair of Z bosons. The W bosons have transverse and longitudinal components of spin and are unstable with a lifetime around 3 x 10‾²⁵ seconds. The Z boson has only a longitudinal component of spin. 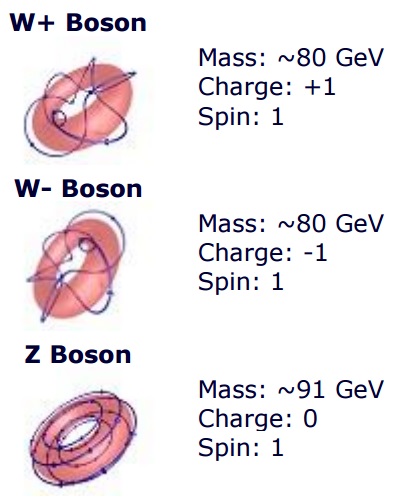 It is important to note what happens when these particles interact with other matter. Both the W and Z bosons, being spin 1 particles, change the direction of spin of other particles they hit. A spin up electron (+1/2) will become a down electron (-1/2). The W bosons having a +1 or -1 charge, will change the charge of particles they hit. A +1/3 charge quark will be changed to a -2/3 charged quark if hit by a W- boson.

Wave Equations and the Electron

To explain this and many other features of electrons and photons, the physicist Paul Dirac (ca. 1902–1984) represented particles in very new ways. He derived the “Dirac Electron” from earlier wave equations. Wave equations had been around for a long time. The French physicist Jean D’Alembert back in 1750, was the first to study wave equations to model vibrating strings in music. Dirac modelled the electron mathematically as two interacting wave equations. He demonstrated the concept of mass as trapped energy. The model allowed Dirac to derive the mass of the electron and predict the existence of anti-matter.

Dirac’s one equation for a massive particle can be rewritten as two equations for two interacting massless particles, where the Dirac spinor ψ, with its 4 complex components, can be represented, as a pair of 2-spinors αA and βA’ … with a ‘coupling constant’ M describing the strength of the ‘interaction’ between the two.

To visually model the mathematical model of the electron, we get what looks much like a Higgs Boson trapped around a Z boson, but acts very different to both. An electron contains a tiny mass, a strong electrical charge, and a large (relative to other particles) magnetic moment. In an electron, a strong electrical current has trapped an orthogonal magnetic field. One spin around the electrical loop is only 1/2 a spin around the magnetic field. A double spin of 720° is required to return the electron to its original orientation.

The electron is a lepton and is very stable. The electron has two heavier unstable cousins, with the same charge, spin, and similar magnetic moments. The Muon with a mass of 106 MeV and the Tau with a mass of 1,777 MeV are modelled with additional windings.

Keep in mind, an electron interacting with a W+ Boson, will be flipped into a positron (anti-electron). The boson (with its much higher mass) will reorient the handedness of the red spin compared to the blue spin, turning a right handed particle into a left handed particle. The Z Boson has a chance of turning an up electron into a down electron.

Waves, Particles and the Phase of the Photon

One thing about energy is that it moves very fast. In one second it is 186,000 miles away. A photon is a packet of energy. In 1807, Thomas Young published his double-slit experiment proving the wave nature of light. James Maxwell (ca. 1831–1879), a Scottish mathematical physicist, wrote “A Treatise on Electricity and Magnetism” in 1873 and formalized the mathematical basis of the electromagnetic wave.

Large energy photons grow large (but not very large) and contract very fast as if they are on a very tight spring. Low energy photons take much longer to grow large, but expand to a much larger size, as if they were on a very loose spring. Based on the connectivity of space itself, the relationship between cycle time and energy is the Planck constant. In 1900, Max Planck, laid out the equations to show a single orange colored photon containing 1.97 eVolts of energy will travel 630 nanometers in one full expansion/contraction cycle. The same 1.97 eVolt photon will take 2 femtoseconds to complete one full cycle.

Complex Numbers, Matrices, and the Polarization of the Photon

Polarization can be a direction like up or down, left or right. Polarization can also mean spin in a clockwise or counter-clockwise direction. The axis of the electric field may be rotating or spinning in time and we would call the photon spin left or spin right. If the axis appears to stay vertical, we do not know for sure that the axis is vertical. We only know for sure that it has the highest probability of being measured in a vertical direction and zero probability of being measured in a horizontal direction.

Using this mathematical representation of the probability of the polarization of a photon highlights the direct and important relationship between mathematics and physics. Matrix multiplication of a vector is now equivalent to an action on the photon. In the real world of physics, the orientation of the photon polarization angle can be manipulated and changed by passing it through a wave plate. In the modelling world of mathematics, multiplication of the Jones vector (representing the photon) by a matrix (used to represent the wave plate), provides the calculation to see what the probability of orientation of the photon is in the real world.

In 1931 Isidor Rabi predicted that the Stern–Gerlach experiment (used to determine the electron was a spin 1/2 particle) could be modified to confirm the properties of protons and neutrons in the atomic nucleus. Rabi built a molecular beam apparatus and employed a weak magnetic field to detect the nuclear spin of sodium. When the experiment was conducted, four beamlets were found, indicating that the nuclear spin of sodium was 3⁄2. To model his findings, Rabi used the work of Joseph Larmor.

With the development of high speed colliders the model becomes far more complex. An electron modelled as a special unitary SU(2) gauge symmetry group, only deals with two properties, magnetic up or down and spin left handed or right handed. The combinations of properties generate only four different particles. With hadrons, there is a literal “particle zoo” with a multitude hadrons discovered. In 1964, The quark model was proposed by physicists Murray Gell-Mann and George Zweig using special unitary SU(3) flavor symmetry. SU(3) symmetry has three properties, often labeled red plus or minus, green plus or minus and blue plus or minus. SU(3) symmetry gives you eight different ways of binding quarks together through gluons.

To visually present the SU(3) group, we use three properties: specifically magnetic up or down; spin left handed or right handed; and, flow in or out.

Close your eyes for a moment and use your imagination. Imagine a large empty sphere, maybe like a big beach ball. Looking closer, notice the surface of the beach ball is actually made up of several layers of different beach balls. Not only that, the layers are able to spin independent of each other with one beach ball spinning one way and the beach ball just inside it spinning in a different direction! Finally, notice the surface of any one beach ball. It’s spinning in two directions. Put your finger on a point of the sphere and track it. You find your finger not only rotating around the sphere, but also, up and down directly through the north and south poles. The poles are spinning very fast and different layers can “couple” together at the poles. OK, time to open your eyes.

Quarks are large empty 3D spinning spherical shells with both longitudinal and transverse components of spin. Quarks colored blue symbolize a +2/3 charge and red symbolizes a -1/3 charge. When layered, these spheres make up Mesons and Baryons. Mesons have two layers of quark shells, Baryons have three layers. Protons and Neutrons (both three layered Baryons) are the final, and most noticeable of the layered quarks. Quark shells are able to stack or layer together with the help of gluons. Gluons act both as “lubricant” between quark layers and as special “taps” that allow energy to flow in or out of a particular region. 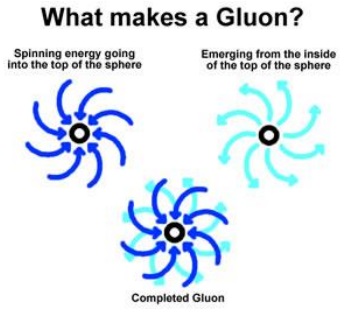 An important attribute of spin on a quark is what happens at the poles. If you follow the spin of an individual point on the surface of a shell modeled this way, you will notice it goes directly through both the north and the south pole of the quark on every turn. This means a lot of paths are directly converging and diverging at the poles. To accommodate this we assume the converging lines are coming in either above or below the outgoing diverging lines. 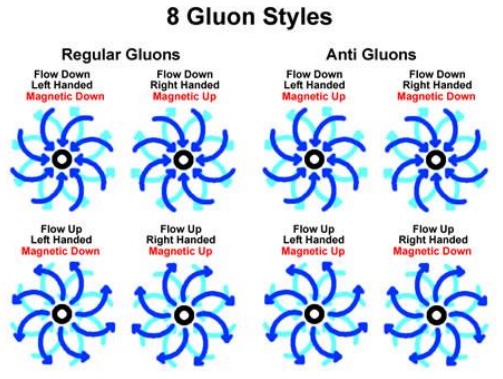 Also, the left or right handedness of the poles tells us which way the magnetic field is pointing for both regular and anti-quarks.

The properties of the gluon are called its color charge. There are three color charges, specifically spin (clockwise or counter clockwise) magnetic direction (up or down) and flow (in or out), making 8 unique gluons. The “Color charge” rules are detailed in quantum chromodynamics (QCD), and are a basis for the interaction of quarks and gluons to form more complex elements.

Visual imaging of the mathematical modelling of elementary particles of the Standard Model significantly improves the usefulness of these models. Different visual images within the same mathematical framework can co-exist until some aspect of the imaging is shown to be inconsistent with the real world. These images must then be corrected, removed or placed within a specific scope. The massive particles built from a variety of swirling energy vortex styles exhibit the same properties seen in particle colliders. Massless particles expanding and contracting as they zip through space do the same unusual things waves do. These images provide a basis to build an understanding of much deeper concepts and help foster predictions that will lead to a deeper understanding of the world around us.

When one accepts one theory and rejects another which is equally consistent with the phenomenon in question, it is clear that one has thereby blundered out of any sort of proper physics and fallen into mythology.